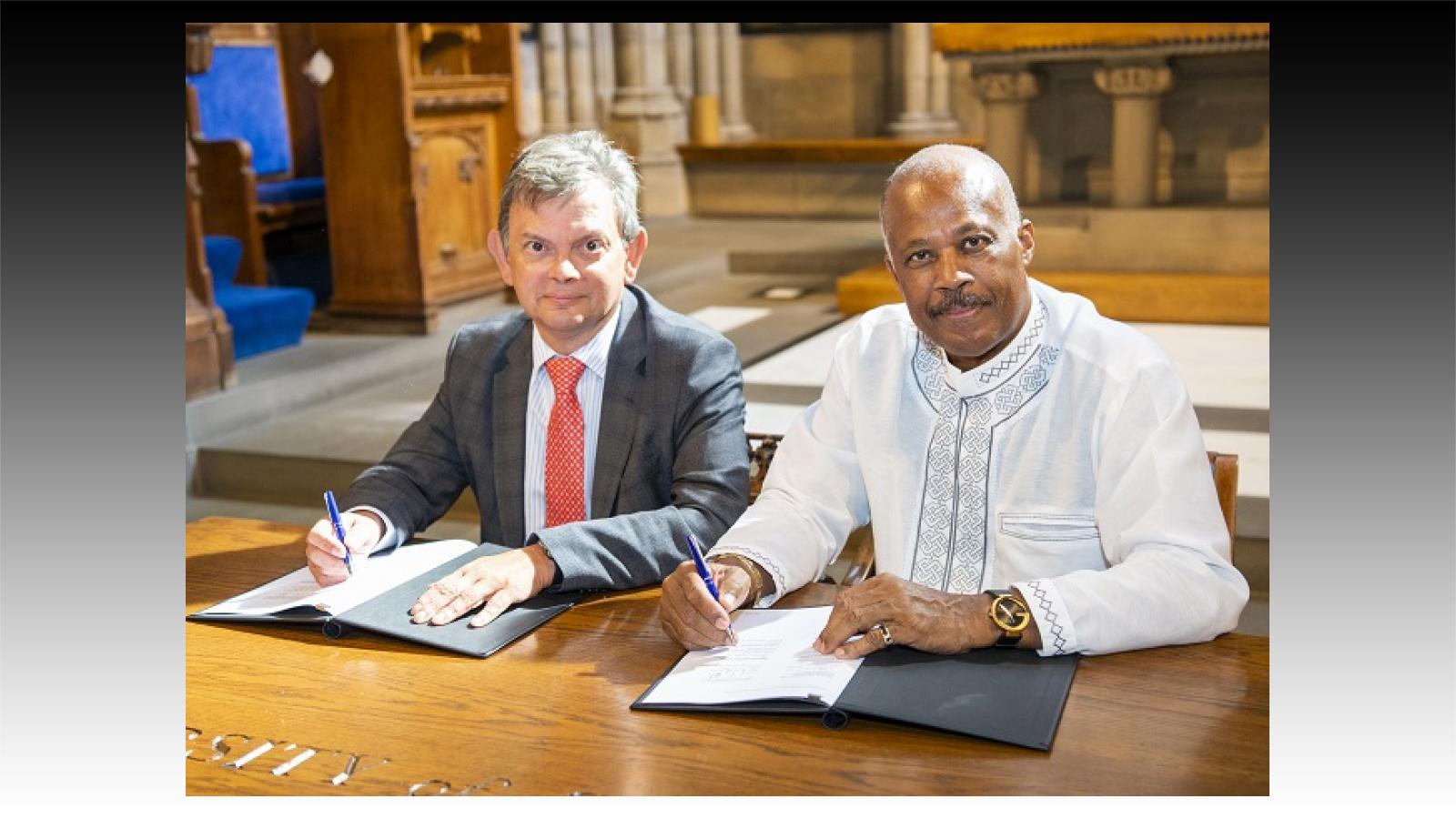 The Centre, co-located in Glasgow and the Caribbean, will host events and activities, sponsor research work, coordinate academic collaborations with other universities, and help to stimulate public awareness about the history of slavery and its impact around the world.

The University of Glasgow has committed to raising and spending £20 million over the next 20 years. It is expected that the bulk of the funding will come from research grants and benefactions and that the Centre will be self-supporting.

The MoU, which was first signed at an event in Kingston, Jamaica, on 31 July 2019, delivers one of a series of recommendations that emerged contained in a report based on comprehensive research conducted by the University into its links with historical slavery which was published in September 2018.

That report, called Slavery, Abolition and the University of Glasgow, is thought to be the first of its kind in the United Kingdom. It acknowledged that whilst the University of Glasgow played a leading role in the abolitionist movement in the 18th and 19th centuries, the institution also received significant financial support from people whose wealth was derived, in part, from slavery.

As part of the MoU event, a plaque to the enslaved was unveiled to mark the fact that the Gilmorehill base of the University of Glasgow was built on the site of a house called Gilmorehill House, owned by a notorious 18th century slaveowner. 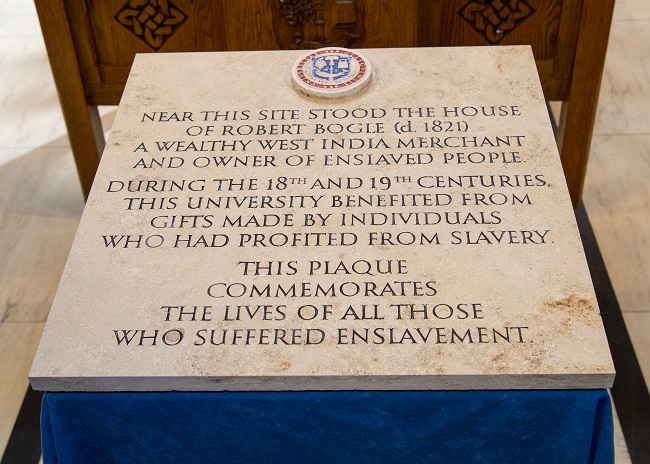 A plaque to the enslaved which will be placed in the University of Glasgow's main campus.

The Scottish Makar (Scotland’s poet laureate) Jackie Kay will recite a poem which was specifically commissioned for the day.

The exhibition features photographs and stories of a selection of objects to explore the often unknown and unexpected ways in which some items within the University’s collections are related to the history of slavery and the abolitionist movement. A range of people connected to the University were asked to give their response to an object and its history.

Professor Sir Anton Muscatelli, Principal and Vice-Chancellor of the University of Glasgow, said: “We are delighted to both sign this truly historic Memorandum of Understanding with The University of West Indies and it is fitting that we do so on the UNESCO day of Remembrance of the Slave Trade. Talking about any institution’s or country’s historical links to slavery can be a difficult conversation but we felt it was a necessary one for our university to have. I am reminded of the words of Professor Sir Geoff Palmer, one of our report’s external advisers, who often says while you can’t change the past, you can change their consequences. This is the story of our journey to do this to further enhance awareness and understanding of our history and the University’s connections to both historical slavery and the abolitionist movement.”

Professor Sir Hilary Beckles, Vice-Chancellor of The University of the West Indies and co-signatory to the Memorandum of Understanding, said: “We are delighted to sign this agreement and look forward to working with the University of Glasgow and to making the Centre for Development Research a significant, successful and long-lasting partnership.”

Scott Kirby, President of the University of Glasgow Students’ Representative Council, said: “We can’t shy away from the past. We need to face up to the flaws in our history. I am proud that the University has openly and honestly owned its history and reported on its links to historical slavery. It is sending out such a strong message to our students – past and present – that while the University can’t change the past, it can now repair and rebuild through active reparations, which includes through the development of our new partnership with The University of the West Indies and other initiatives.”

Cllr Graham Campbell responded to a rare “Slave Bible” – only three first edition copies are left in the world. Any passage that might incite rebellion was removed – gone, for example, were references to the exodus of enslaved Israelites from Egypt.

Councillor Campbell said: “As Glasgow’s first councillor of African Caribbean Jamaican descent, I am very proud to have played a small part in the campaign for reparative justice linking Scottish and Jamaican institutions as part of Flag Up Scotland Jamaica. As someone who has studied at both institutions, I am delighted at the steps that the University of Glasgow and the University of the West Indies are taking today to recognise the legacy of slavery and the need for its practical acknowledgment.

“Our mutual recognition of the appalling consequences of that past - an indictment of Scottish inhumanity over centuries towards enslaved Africans – are the justifications which are at the root of the modern-day racism that we fight now.   This action is a necessary first step in the fight against institutionalised racism and discrimination in Scotland and the UK and for the international fight for Reparative Justice.”

Professor Sir Geoff Palmer responded to a ship built on the Clyde called Jamaica for the exhibition.

He said: “A considerable amount of the wealth gained from slavery in the British West Indies came from the toil of about 300,000 chattel slaves who lived short lives in Jamaica. I selected the plan of this Glasgow-built ship called “Jamaica” for the exhibition because it says to the world that Glasgow, Scotland, Jamaica and the West Indies will go together in the first light of the reparative justice programme lit by Glasgow University in September 2018.

“My hope is that others will follow this great example where education will be used to mitigate some of the cruel consequences of this slavery.”

Dr Christine Whyte has collaborated with colleagues in the University of Glasgow’s Library and The Hunterian to create the new exhibition.

Dr Whyte, a lecturer in Global History based at the University’s College of Arts, said: “For many centuries, people of African descent have called the attention of the world to the injustices of the slave trade, slavery and racism. The University of Glasgow is responding to that call by opening this dialogue about reparative justice. I hope this exhibition can provide space for reflection on the memories of enslaved people and serve as a testimony to the tireless activism of Scottish anti-racism campaigners.”

Call and response: the University of Glasgow and slavery

For more information contact Aine Allardyce in the University of Glasgow Communications and Public Affairs Office on 0141 330 7126 or email aine.allardyce@glasgow.ac.uk