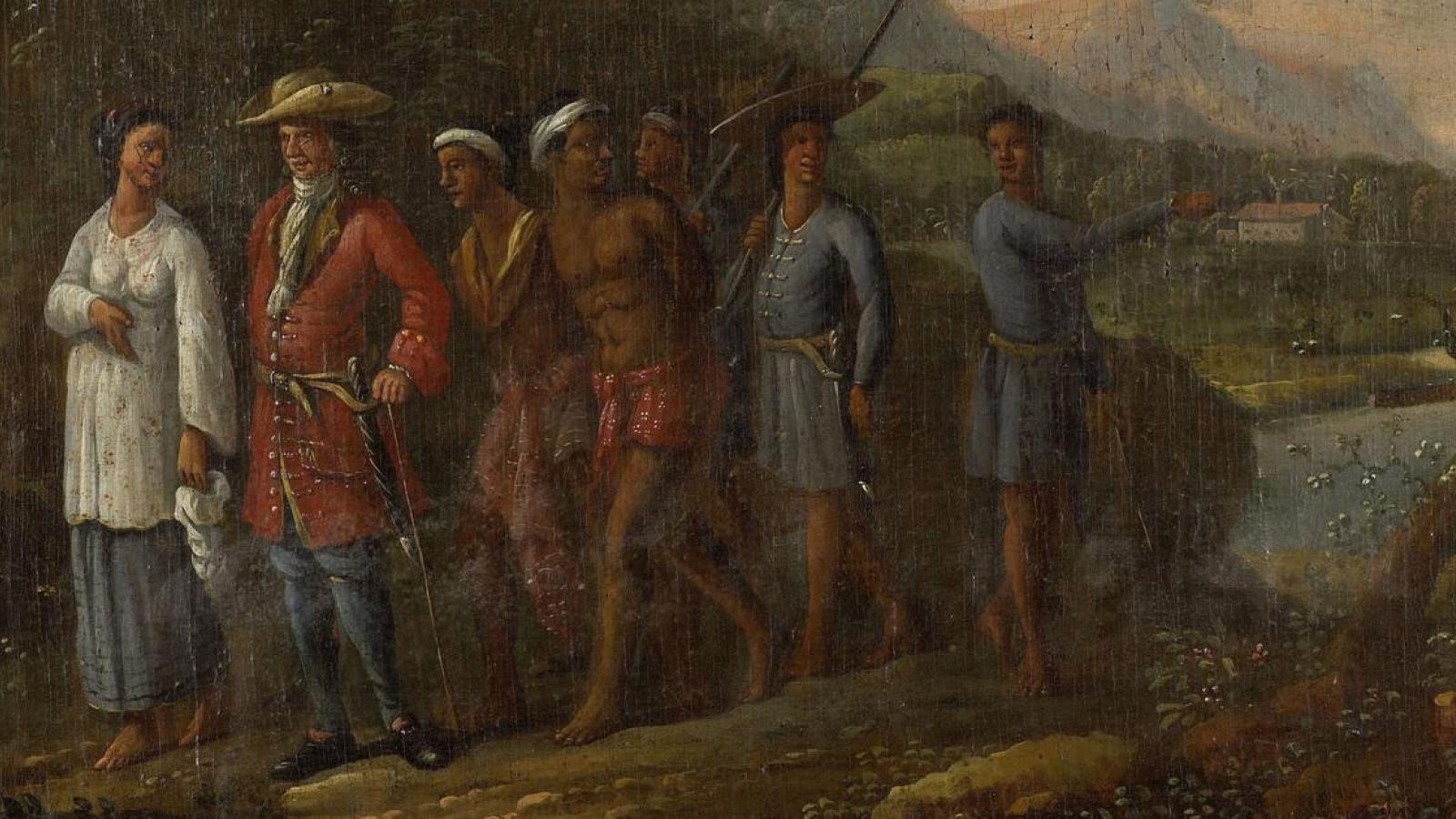 In the 17th century, the Danish set up a trading post in the village of Tranquebar on Tamil Nadu’s Coromandel Coast and supplied servants to aristocrats.

It was a glacial winter evening in 1713, the court dwarf Frøken Elsebe broke out in a cold sweat. Queen Charlotte Amalie of Hassel Kassel seemed hypnotised by the newcomer. It was a bad omen. Her future was at stake right now. The man who stood was of medium height, his dark skin shining under the large chandelier. He did not seem impressed by so much pomp. There was even a certain nonchalance in his attitude. The queen seemed amused and curious about the young man. His name was Timotheus, and he came from a distant country called India. Frøken Elsebe had heard this name often for some time. A member of the “Dänisch-Hallesche Mission” presented the young man as a Tamil being from Tarangambadi.

However, Timotheus was not the first Tamil to come to Denmark. Frøken Elsebe knew about this small community that had been living in Copenhagen for some time. It was said that they were brought in as slave servants. They were called Morianer, which is a term used for all people with dark skin regardless of where they were from. At that time, there were domestic servants from Africa, India and South East Asia that were called Morianer. And this Timotheus was one of them even he was not a domestic servant. What did she, the dwarf of the court, have to do with these people? Her status was better. So, she was shocked and panicked when the queen announced that she wanted to keep the little Tamil boy for herself. 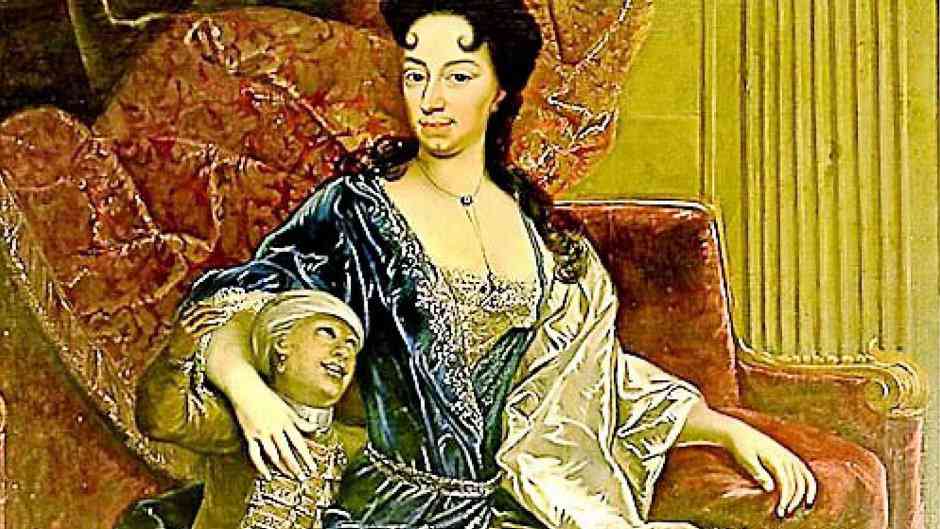 Morianer is a term used for all people with dark skin regardless of where they were from. Courtesy Ari Gautier.

The village of Tranquebar lies on India’s Coromandel coast in Tamil Nadu. Before the arrival of the Danes, the village was known as Tarangambadi. But it is also called Sadanganbadi in the 14th century. During the Chola Empire, the area around the quiet fishing village was an important Buddhist centre. The neighboring cities Nagapattinam and Poompuhar were important places for pilgrims and students from China.

For centuries, Tarangambadi was under Chola kings who had a kingdom in the Cauvery River delta with Poompuhar as capital from the first century before common era to the second century common era. The Cholas disappear from the political map but reappear in the ninth century. After a long absence they then established an empire in the ninth century far larger than the original kingdom which goes from South India to Sri Lanka and parts of Indonesia.

After the defeat of the Cholas, the Vijaynagar Empire conquered the larger part of South India. They installed a viceroy (titled Nayak) in Tanjavur to rule the region. As the power of the Vijaynagars waned, the Nayak of Tanjavur ruled more and more as an independent king. It was the Nayak king Ragunatha who signed the treaty with the Danish in 1620, allowing them to establish a trade post in Tarangambadi. The Danish first came to Tranquebar in 1620 after a failed attempt to establish a colony in Sri Lanka. The Danish had colonies in Asia, Africa, and the Caribbean. Trade was carried out by companies with the support of the Crown. 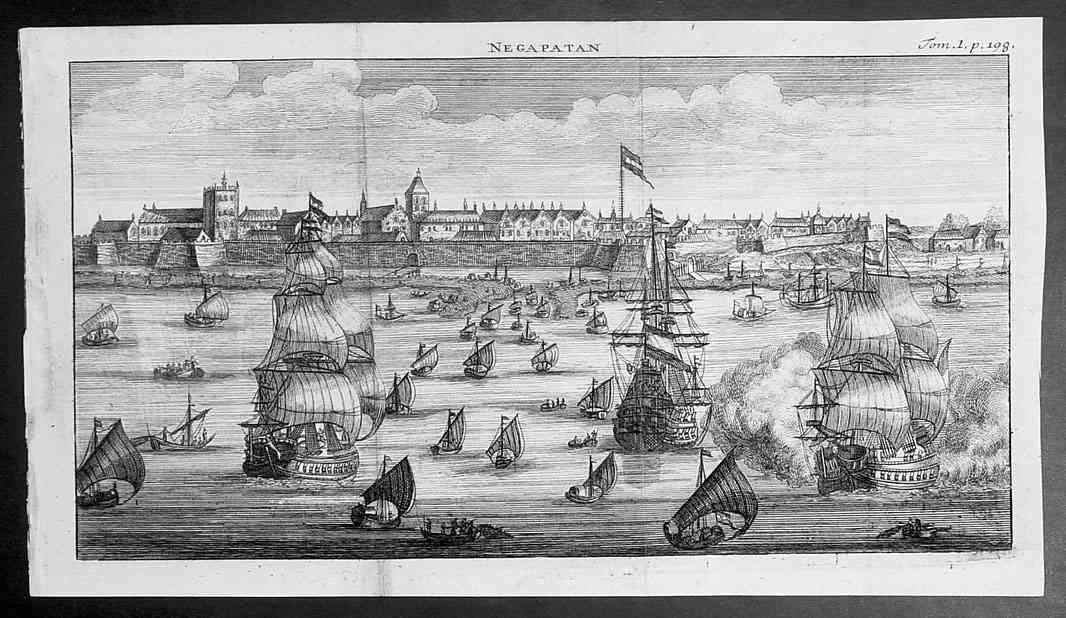 An illustration of the Coromandel Coast harbor of “Negapatam” (modern-day Nagapattinam) from the travel accounts of the Dutch East India Company in 1702. Credit: in public domain, via Wikimedia Commons.

From Tranquebar, the Danes had several networks including small trade posts in Macassar, Bantam, Masulipatnam and Pondicherry. They were trading diamonds, spices, Chinese silk and gold. Two of the overseas routes were also used to carry enslaved persons. The route between the coast of Guinea and the islands in the Caribbean was supplying slaves to the plantations, and the Asian route was supplying domestic servants to aristocratic homes in Denmark and Norway. And this is how the small community of Tamil slave servants was established in Denmark. But this was not the case with Timotheus. He was brought for a different reason.

Srimad Raghunatha Nayak, king of Tanjore could not have imagined in 1620 when he sent a letter written on a golden sheet that his subjects would one day be bought and traded as commodities in Denmark and Norway. The Danish Admiral who travelled to Tranquebar with Captain Roeland Crape went personally to Tanjore and negotiated the treaty. Even if history retains only the names of Bartholomaus and Father Schwartz as the most important missionaries who propagated the Christian faith, others such as Henrik Weiss, the first commander and priest of the Church in the Fort, should not be overlooked.

A part of the letter written on a golden sheet. Courtesy Arie Gautier.

It was not until 1704 that King Frederick IV decides to establish a Lutheran mission in Tranquebar. But the Danes were not the first missionaries. A Jesuit Catholic congregation of Portuguese missionaries from Goa due to their presence nearby in Nagapattinam had already converted a small part of the population called Catholic mesticos. Timotheus is one among the first converted Tamil boys brought to Denmark to be trained as missionary. And the Queen wanted him for herself.

That the queen wished to procure a subject from her colony for personal use was not unusual. It was quite normal at that time to give or exchange slave servants not only in Denmark and Norway, but all over Europe. In India, debt bondage and other forms of servitude were widespread. Mortgaging a child, or wife, to raise a loan was common practice in different parts of the country.

Since parents, as was the custom in Tranquebar, wished to sell their children as slaves, it was not wrong for the Church to buy them for its own purpose and give them a better life. This was not considered un-Christian. They were converted, given a minimum education and taken to Denmark to be sold to royal and upper-class families. This suited them since they were interested in slaves who had Christian-European education. Thousands of children were taken from Tranquebar in such way. This system was justified insofar as it was in the spirit of the times. That is how Timotheus was brought to Denmark.

Fort Dansborg, or the Danish Fort, in Tharangambadi in Tamil Nadu. Credit: I, Eagersnap, CC BY-SA 3.0, via Wikimedia Commons.

He was destined to become a missionary, but the Queen wanted him. How he managed to escape from the clutches of the queen is unknown. Nevertheless, a year later he was found mixed up in a scandal. Within a year he fell in love with Sahra, a Tamil slave working for a Danish priest. This was unacceptable to society. Ignoring the rumors, Timotheus begins his missionary studies and was sent to Halle in Germany by the king for an internship. There he studied German at the Danish-Halle mission that was established in 1706.

On his return, he was asked to train two missionary candidates in Portuguese and Tamil for Tranquebar. The missionaries recognised the qualities of the young Timotheus and prepared him for another profession, that of a bookbinder. He successfully completed this apprenticeship in 1717 and decided to return home. But not without his beloved. Not only did he get her hand in marriage, but he also managed to find a job at the mission back in Tranquebar.

The Tamils in Denmark were not masters of their destiny even there were free and enslaved domestics. They were considered precious merchandise that had to be kept with care. Following the fashion in the rest of Europe, these men and women were considered exotic products that every bourgeois society had to possess. They were used as valets, page boys objects of entertainment and curiosity during social events and as mascots. The king and the high dignitaries exchanged these Tamils as gifts.

Though most of the Tamils living in Denmark at that time were slaves, there were a few who stood out. Thus, Sennapa Naik is an unusual and interesting case. Sennapa Naik embarked as stowaway on the ship Juliane Mari on the February 4, 1795, and went to Denmark with the intention of lodging a complaint with the King of Denmark against Governor Peter Anker who was mistreating people of his caste. After six and a half years, a few stints in prison, a Danish girlfriend and a daughter, Sennapa Naik left Denmark to return home. Alone, he boarded a ship in 1802 and landed in South Africa. What became of him is another story.

Ari Gautier is a writer and poet, whose most recent works, The Thinnai (the English translation of his second novel, Le thinnai) and the short story collection, Nocturne Pondichéry, were both published in the summer of 2021.